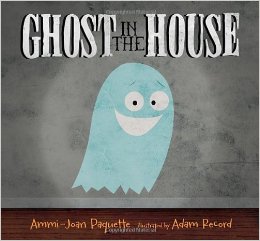 Ghost in the House

I love Halloween, and I love things that are creepy…but oddly enough I don’t like to be scared.  Haunted houses?  Forget it!  So it’s no wonder that I’ve fallen in love with Ghost in the House written by Ammi-Joan Paquette and illustrated by Adam Record. This is a haunted house I’d actually like to visit.

The story starts off on a black page with the simple exclamation “Boo!”  On the next page a ghost appears—the most adorable ghost you’ve ever seen (yes, even more than Casper).  This structure continues, enunciating the creepy sounds the house makes and breaking tension with a collection of friendly creatures: a mummy, a monster, a skeleton, and a witch.  Finally the creatures stumble upon something that really frightens them—a human boy.

This book somehow manages to maintain the traditional eeriness we associate with haunted houses, which includes striped wall paper, creaking stairs, and shadows at every turn.  Yet its full of bright and contrasting colors.  The creatures themselves are vibrant, even as they wander down dark and gray hallways.  You might even wonder what this cheery bunch is doing in such a spooky place.

I love how simply and effectively the illustrations reflect the text.  Two eyes on a black background and the ghost’s worried expression reveal the characters’ unease.  Possibly my favorite page features the human boy, with a wide-eyed look that conveys his bafflement.  As the creatures run away, the boy looks straight at the reader and shrugs, as if to say, “What can you do?”

As you’re visiting haunted houses, or perhaps haunting them yourself, “on this dark, spooky night,” it’s always good to remember that there isn’t a creature scarier than a human.  Have a Happy Halloween! 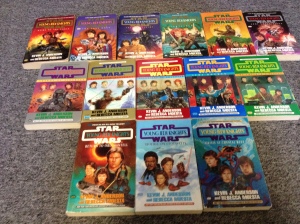 On September 23rd, Dominican University will be holding its fifth annual Caritas et Veritas Symposium, and the Butler Center will be taking part in the festivities.  We’ve created library date-due cards with space for members of the Dominican Community to answer a single question: what book from your childhood contributed to your identity?  Participants are encouraged to bring their cards to the Butler Center on the second floor of Rebecca Crown Library, room 214, where we will collect your responses.

But for now, a preview: what book contributed to my identity?  To answer this question, I first had to ask myself, how exactly do I identify?  In the most basic terms, I classify myself as a reader, a writer, a geek.  If there was one work really started me down the path to becoming what I am today, it was Kevin J. Anderson’s and Rebecca Moesta’s Young Jedi Knights series.

Prior to reading this series I would not have identified as a reader.  I remember reading being a struggle for me until middle school.  But after reading the Young Jedi Knights series (more commonly known among fans as the YJK books) I suddenly wanted all the Star Wars literature I could get my hands on.  And since LucasFilm continually publishes Star Wars novels, there are always more Star Wars books to read.

The YJK books made me a reader first, but the writer and the geek followed in quick succession.  By the time I reached high school, I was writing and posting Star Wars fan fiction online, which led me to pursue a major in Creative Writing as an undergraduate student.  Eventually, I began writing original stories.  Reading the Star Wars books also steered me toward other science fiction works, such as Ender’s Game, 1984, and Do Androids Dream of Electric Sheep?  I steadily became indoctrinated in other fandoms, making me the geek I am today.

The YJK also had a specific effect on the way I viewed myself as a young girl.  While it could be argued that although all five main characters were equally important, Jaina Solo (the daughter of Princess Leia and Han Solo) acted as the leader of the group.  She was introduced as an inquisitive, mechanically-minded girl who preferred grease stains to makeup.  She was always the character to stay cool when a situation heated up, and has continues to be my favorite character in the Star Wars universe.  The YJK books also featured Tenel Ka, an athletic, rustic girl from a backwards planet with a no-nonsense attitude.  Like Jaina, she wasn’t worried about her appearance, but rather about developing her abilities.  Four books into the series, however, she lost her left arm in a lightsaber training accident, and as she recovered it was revealed that she has a somewhat secret identity: she was really the princess of a 36-planet cluster.  Both girls were able to become strong characters without losing their their femininity and were displayed in leadership roles more prominently than the three boys who made up the rest main cast.

The YJK was a series filled with great role models, fast pacing, and valuable lessons.  Best of all, it was easy to read.  These were definitely high-interest, low-level books.  Although the characters began at the age of fourteen, the series was really written at a fourth grade reading level, which is just another reason why they were able to pull me in when I was a struggling reader.  Without it, I wouldn’t have become the reader, writer, and geek that I am today.

So what book from your childhood contributed to your identity?  Stop by the Butler Center next Tuesday and let us know, or fill out the form below!