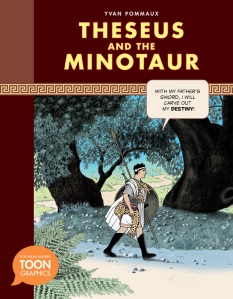 Theseus and the Minotaur

I grew up with ancient mythology. My parents met in graduate school, themselves 1/2 of the first cohort of Classics PhD students at the University of Washington (three men and one woman–my mom used to joke that my dad “won” the contest) and our childhoods were steeped in the stories of ancient Greece and Rome. Indeed, the ancient world was everywhere, in the pictures on the walls, the statues on the tabletops, the books on the shelves, even the secretive Latin conversations at the dinner table. And the myths were our bedtime stories. Think about that for a minute. I remember being five years old and feeling plainly terrified that if I looked my mother square in the face I’d be turned to stone. I got past it, of course, but these stories will always feel very close to me.

I also remember struggling with the definition of mythology as organic, adaptive story that grows and mutates in different cultural iterations. I wanted to know the real, official account of Medea, and resented my father’s challenging assertion that all of the versions are equally valid, right up to the contemporary reimaginings (perhaps my students, themselves occasionally frustrated by my refusal to offer a straight answer to anything, now know whom to blame). But I have come to love the idea that these ancient stories represent deeply resonant foundations on which all manner of human interaction can be explored. And I am always on the lookout for new contemporary volumes to add to the canon.

This one does not disappoint.

Like all Toon books, the comic format relies on careful reading of the images to digest the story. Word balloons, and, in this case, some general narrative, further the account, but the large spreads and small detail images constitute the heart of the story. Pommaux’s simple pencil line drawings are easy to follow, yet display remarkable sophistication in their style and execution. Small details, like the family resemblance between King Aegeus and his son Theseus reinforce the bountiful mythology. The artist superimposes crisp, flat figures on smudged, sketchy grounds, establishing a sort of cinematic energy that propels the story along. Pommaux plays with the organization of the (often unframed) panels as well, stretching them across the top and/or bottom of both pages, effectively playing with the tropes of the comic canon in the same way bards and playwrights played with the stories themselves. There’s some terrific front and back matter here, too, including endpaper maps, character sketches for principle players, shorter definitions of people, places and things in a longer index, and suggestions for further investigation.

It’s easy to imagine kids reading these words and pictures, over and over. With any luck we can look forward to Perseus and the Gorgon coming up next!