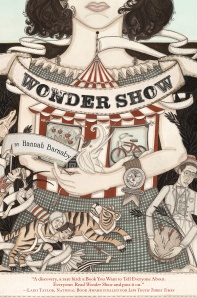 Since reading Wonder Show I’ve had the chance to tell a lot of people about it. Every time, I find myself outlining the plot for them. There’s a girl, I say, who is abandoned by her family and sent to a home with a sadistic head master. She’s mistreated, I tell them, but also possibly guilty of a terrible crime. And so she escapes to a traveling freak show, which is when the story really begins. Oh, they say, cool. And after they have politely smiled and nodded their head, I realize that I have failed. They think this is just another novel. I could go into more detail, sure. I could point out what a relief it is to read a book written for young adults that is not entirely in the first person. I could talk about how Barnaby weaves together the omniscient voice of the narrator, pieces of diary entries, letters, lists, and chapters from the viewpoint of tertiary characters. I might explain just how rich those characters are, that they are not just a quirky backdrop for the adventures of the protagonist, but are on journeys of their own deeply woven into the larger narrative. I could talk about how the book is really about the power of storytelling and how we define, burden, and limit ourselves with the stories we tell ourselves about who we are.  But who would listen? I’m not the storyteller that Barnaby is and even if I was, most people don’t want to hear about anything but the plot. They want the coming attractions that show exactly what is going to happen and reveal all the best jokes. But sometimes, the story is all in the telling. And Wonder Show is that kind of story.