We left off with three women whose 2013 work merits some Caldecott consideration. Here are a few men whose illustrations we want to look at, too (remember, I’m going alphabetically by author – the gender breakdown is purely accidental): 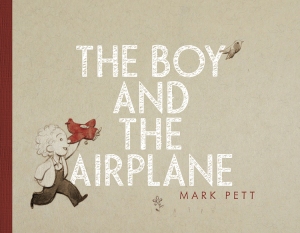 The Boy and the Airplane

This wordless picture book is awash in poignant, sepia-toned nostalgia, so you know I’ll love it. A little boy receives a package (from an unidentified stranger – look carefully) and opens it to discover a red toy airplane. He plays and plays and plays, until the plane accidentally lands up on the roof, beyond his reach. Try as he might, he can’t get it down. So, he plants a seed. Year by year a great tree grows. The boy grows, too, becoming a young man and, eventually, an old, Santa-Claus-looking one. At last, he climbs the tree and finds the plane, just as he left it. Instead of playing, though, he wraps it up and pays it forward. I can already anticipate heated arguments about whether or not this is really a book for kids (nostalgia has that effect on us) but expect consensus with respect to the subtle art with which the story is told. The pages themselves are a succession of varied drab grays, fixing a somber tone that persists, even in the happier moments. And the wistful facial expressions, so simply realized, are somehow simultaneously round and piercing, all at once. We are left with a tender cycle of loss and reconciliation, but the melancholic tone establishes the losing, not the finding, as the predominant thematic emotion. We can go back and forth as much as we like about the need for a poignant picture book about the inevitability of loss. But taking the theme as a given, it’s hard to argue with its artistic execution.

In 2013 Jon Klassen became the first illustrator to win both the Medal and an Honor since Leonard Weisgard did it in 1947. Can he be the first repeat winner since the Dillons did it in 1976 and 1977? With a book like The Dark in contention there’s no denying the possibility. A little boy fears the Dark, and so he confronts it. Snicket personifies the Dark in his almost elegaic text, and though our young hero Laszlo fears him, he is more a mystery than a real threat. Klassen sets the action in a huge, ramshackle house, full of the sort of staircases, closets, and corners that invite worry. But what’s especially striking about this book is not so much what Klassen build into the illustrations but what he leaves out. There is no furniture to speak of, save Laszlo’s bed, and a dresser in the basement with curious import. And there are no adults, either. Klassen has really tapped into the insecurities of childhood and manifests them on the page in stark resonance. It’s easy to celebrate an artist’s exquisite hand, fine line, sense of shape, manipulation of color, etc. It’s not so easy to recognize what the artist excludes. This book gives us the rare opportunity.

A little boy is bullied, rather mercilessly. Friendless, he roams the city streets alone. He is adopted by a little blue bird, who becomes his trusted companion. The bullies persist, though, and in a particularly brutal attack, his little blue bird is struck by a stick and killed. Other birds arrive, and the boy and his bird are flown to the sky where the little blue bird is released. The Caldecott tends not to love purely digital work; somehow art is supposed to be made by hand. But it is only a matter of time before we recognize the computer as just another medium, no different from pens or brushes or woodblocks. And this could be the time. Staake, known more for a style of chaotic, somewhat irreverent ebullience, really reins things in here, working in a restrained palette with simple lines and straightforward composition. By getting out of the story’s way, he makes it all the more powerful. I have already read some musings about the inappropriateness of such a stark treatment of difficult subject matter. But to my eyes, by expressing the truth just as he sees it, Staake pays extraordinary respect to his young readers. And there’s a lot to say about the value of that kind of respect, at least when we’re talking about the most distinguished picture book for children.