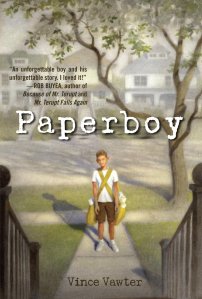 As 2014 ALA Annual approaches I find myself, as ever, catching up with the award-winning books of the year, in anticipation of the upcoming conference’s many festivities. I just finished listening to the affecting recording of Newbery Honor-winning Paperboy by Vince Vawter, a semi-autobiographical story of a boy with a stutter coming of age in Memphis, TN in 1959.

The entire novel takes place over the course of a few weeks in the summer before 7th grade. Our protagonist, whom we come to know as Vince at the end of the book, takes over his friend Rat’s paper route and though his interactions with the people he meets as a consequence learns about himself and his place in the world. I will leave the details to you (if you’ve read the book you already know them, and if you haven’t, I don’t want to spoil them) but I do want to look at a pivotal scene where Vince and his guardian find themselves in grave peril, due, to some degree, to Vince’s disobedience. There is risk of real bodily harm, death even, and yet in the moment of danger there is no guilt and no reproach, only devotion and commitment. I credit the author for his keen characterization and careful plotting. He telegraphs none of these feelings, focusing instead on the circumstances and allowing the emotions to course underneath, organically. It’s a beautiful piece of writing, successful for its simple clarity and for the well-crafted build-up before it.

The scene has been much with me of late. Beyond its own literary resonance, it speaks to my understanding of the news of the day, specifically the aggressive scrutiny of prisoner of war Sgt. Bowe Bergdahl negotiated release. There are some who proclaim Sgt. Bergdahl a deserter who besmirched his homeland’s good name. They see his exchange for five Guantanamo-detained members of the Taliban as an abominable expense of geopolitical capital. They call him a traitor and thereby invalidate any claim he might have for American support. But my recent experience with Paperboy reminds me that our relationships have value expressly because they are not dependent upon our perfect behavior. We are allowed mistakes. Those who love us and assume responsibility for us take care of us. No matter what. I would hope that a soldier putting himself or herself in harm’s way could expect no less of his or her government, regardless of whether or not that soldier had stepped afoul of the line. I imagine that the circumstances surrounding Sgt. Berghadl’s initial disappearance will be investigated, and that strikes me as wholly appropriate. But I’m thankful and proud that the United States Government negotiated his release based upon his citizenship, not his conduct.

We all make mistakes, and none of us would want to be defined by our worst ones. Life is so very complicated, and how lucky we are that we have fine books like Paperboy to help us make sense of it.