Across the country these days folks are busy carping about the weather. It’s a dangerous business, that. In Chicago, at any rate, complaints about snow or temperatures (don’t even MENTION the wind) are met with furious dismissal. Give it a try. The next time a cashier asks you how you are, offer up something like “I’m freezing, thanks, how are you?” Dollars to donuts there’s someone a person or two behind you in line at the ready with “We do live in Chicago, Wimpy McPutyourbootson” or some other upbraiding that’s just as helpful.

I grew up in Cleveland. I get it.

But if all of us are mentioning the weather all of the time, there’s probably a reason. And rather than complaining about the complainers, I’m fixing to join in the fun.

So, here are a few wintry picture books to make something magical, or at least memorable, of all of that brrr. 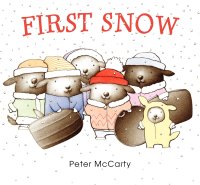 Pedro has never seen snow before, and he’s not sure he’s interested. His canine cousins assure him it’s the best, and set out to convince him, with all of the best things about snow. They sled and snowball, make angels and catch flakes on their tongues. Who could resist? Not Pedro. He’s a convert, and so, perhaps, am I. McCarty has a magical way with texture. Working in graphite, he manages to create the softest, fuzziest creatures, and contrasts that incredibly tactile fur with flat, solid bundle-wear, producing a cast of characters impossible not to warm to. Time for some hot chocolate.

The city depends on trucks, to fix power lines, tow stranded school buses, and put out fires. The lowly garbage truck occupies the glamourless place at the bottom of the heap until a seasonal snowfall brings the city to its knees (shoulders?). With a plow affixed to his front (and without his Clark Kent spectacles) Supertruck saves the day. As he did in Little Tug, Savage imbues his transportational characters with extraordinary personality, especially given their simple, iconic colorations and blocky nature, and sets them all against a mid-century-style city brimming with life. Little kids will welcome Supertruck’s arrival. I’d be happy for him to drive past my house, too, right about now, come to think of it. 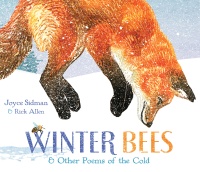 Winter Bees & Other Poems of the Cold

While there are surprises in this life, so are there predictabilities. When winter arrives in Chicago, it will be cold and snowy. When I go outside to shovel my walks, my dogs will ruin something inside. When Joyce Sidman produces a book of nature poetry, it will be lovely. In Winter Bees she examines the winter activity of various flora and fauna, combining poetry and science in her trademark way. Individually the entries, with their bright language and crisp, polychrome linoleum prints, celebrate the variety of life happening beneath the snow. And together they communicate the delicate ecological symbiosis that sustains us all. It’s all too easy to forget that winter has its purpose and its place, and I’m happy for this elegant reminder.

One thought on “Snow Days”