Yesterday evening twelve dutiful children’s book discussers met to consider a selection of picture books of international provenance, applying the Caldecott Medal terms and criteria to picture books ineligible for the actual award, in hopes of learning about some wonderful books, and the Caldecott Medal itself, in the process. We began with 18 very different books (you can find our complete discussion list here) and ended up with one winner and three honor books.

Our honor books are:

Tiny Creatures: The World of Microbes

A scientific exploration of microbes explains their natural existence and celebrates the intricacies of their ecological function. Our committee appreciated Sutton’s use of scale, visually explaining the size and amount of the microbes around us; the friendly, approachable tone of her watercolor paintings, reinforcing the book’s even, almost enthusiastic approach to its subject; and the repeated presence of two children, not mentioned in the text, who, in their constant dress and curious attitude, serve as a ready point of access for the young reader.

At the Same Moment Around the World

This magical book circles the globe, exploring different children’s experiences at a single moment in time. We begin at 6:00am in Senegal, and travel east across time zones, to France, to Bulgaria, to Iraq, as kids of all stripes work, play, eat and dream. Each spread moves from one country to the next, connecting otherwise disparate locales and delivering a powerful message of human continuity. We appreciated the tall trim size, reflecting the longitudinal time zones; the attention to detail, with watery endpapers suggesting the surrounding oceans; and the indelible warmth of the culturally specific depictions. The final, fold-out map, that names the children and fixes them on the globe, adds concrete understanding to the sensitive expression of community. 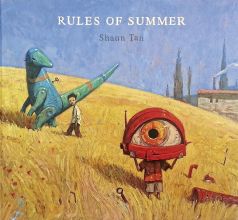 Two brothers offer fantastical, superstitious interpretations of a collection of seemingly pedestrian rules, brought to bigger-than-life through Tan’s edgy, immersive, dreamlike paintings. While each of the rules comes to individual life in its own spread, Tan links them together in an emotional arc that traces a bumpy, competitive, and ultimately tender relationship between two brothers who appear together, at the story’s end, surrounded by drawings of their imaginative adventures. We appreciated the painterly precision of the drama; the powerfully depicted relationship; the curious, sometimes impenetrable symbolism of birds and crowns; and the way the sinister undercurrent of the imaginings resolves into dependable comfort.

And our CaldeNott Medal goes to:

A fox seeks shelter for herself and her babies and, when chased from a house on a wintry night, takes refuge in the nearby greenhouse. The house’s boy delivers a basket of sustenance, and the fox repays the kindness, decorating his bedroom with flowers as he sleeps. Princess Camcam creates her illustrations in three dimensions, photographing dioramas of intricately cut and painted paper, carefully arranged and lit. The effect is intimate and tranquil, with hushed colors, soft shadows, and an immediate sense of place. The artist’s careful use of sharp and cloudy focus pulls the viewer into the images, and her supreme command of light conveys the chill of the air, the stillness of the snow, and the arrival of the morning. Simply breathtaking.

It was noted that ours is not a “mock” endeavor but is instead, as the only one of its kind, the CaldeNott. Boom. It was also noted that we have chosen a book about a fox two years in a row. Make of that what you will.

This fall we’ll (re)turn our attention to international picture books, to do this all over again in 2016. Feel free to send any candidate titles my way. In the meantime, I’ll be off to the Bologna International Children’s Book Fair with a group of students in March, in search of our own. We’ll keep you posted.