This week I am excited to share Looking for Group by Rory Harrison. It’s, without a doubt, one of my favorite reads of 2017 so far. If we starred our reviews here on Butler’s Pantry, I would star this one. Continuing our theme of selecting titles that uphold ALSC’s Core Values (collaboration, excellence, inclusiveness, innovation, integrity and respect, leadership and responsiveness), Looking for Group stands out for excellence, inclusiveness, and integrity and respect. 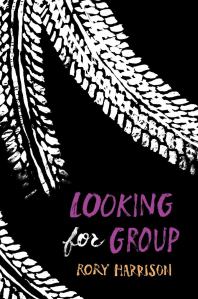 Dylan might not be dying anymore, but he isn’t well either. His cancer is gone, but he doesn’t know how to start his life over again. It doesn’t help that he’ll never convince his mother, who works a late night shift, to come to his high school so he can re-register for the spring semester. Instead of starting classes, he steals his mother’s car and drives to Amaranth to find his only friend Arden, who he met online in World of Warcraft. Arden is perfect—“Everything dark burns away when she smiles”—but they come from different worlds. She has everything and has been everywhere, while he has nothing except the fifty dollars in his pocket and some Tic Tacs. Still, Arden wants to escape from her father who won’t accept her gender identity and she’s ready for adventure when Dylan invites her on an IRL quest. Together they embark for California to find a sunken pearl ship lost in the Salton Sea. Along the way they discover friendship, life, and love.

Funny, geeky, and hopeful all at once, Looking for Group explores what it means to love others and yourself. Dylan struggles with his feelings for Arden, because he has always been sure that he’s gay. He doesn’t want to love her for the wrong reasons. Overcoming self-doubt and rekindling his desire to live are central to his character development throughout the novel. Harrison’s portrayal of Arden, a transgender teen, is strong for its resistance of cisnormativity. The character’s identity and expression are never glossed over or depicted as a deficit. While over the last few years transgender teens have become more visible in mainstream young adult literature, books often focus on characters who “pass” as cisgender or who aspire to pass. What makes Harrison’s portrayal of Arden special and groundbreaking is that Arden does not pass, but she is unashamed and beautiful. Although the last chapter brings the book to a sudden ending, it doesn’t detract from the overall value and quality of the narrative. This 2017 Spring release deserves a place in every young adult collection.