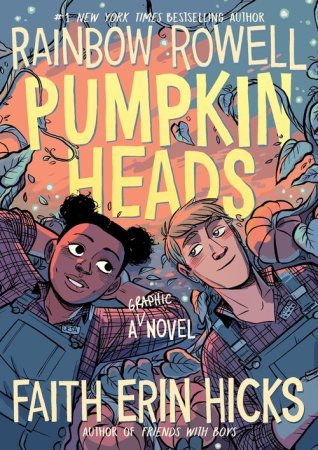 It’s the last night of their final pumpkin patch season before Deja and Josiah head off to college. As the weather turns, Deja cajoles her employee-of-the-month pal to leave the confines of the Succotash Hut and give their beloved pumpkin patch an epic sendoff. Author Rainbow Rowell (Eleanor & Park) teams up with author/writer Faith Erin Hicks (Comics Will Break Your Heart) to deliver a madcap adventure of two friends navigating their ways through love, friendship, and corn mazes.

Graphic novel Pumpkinheads combines a pithy humor with teenage self-reflection. The quirky pop culture references (there is a John Denver cover band called John Colorado Springs) are delightful, but more delightful is Deja, a pumpkin patch heartbreaker whose love of snacks is only surpassed by her affection for her friend Josiah. Josiah plays the rule-abider to Deja’s social butterfly and the two complement each other well. However, Rowell and Hicks do not let their characters stay stuck in their ways. When the pair’s discussion turns to fate, Josiah says his leave-it-up-to-fate attitude is a perfect match for Deja’s go-getter nature. Deja is quick to reply that his passive nature means that she is the one doing the work to makes things happen.

Rowell and Hicks alternate action sequences with emotional revelations. Despite great dialogue, some of the most powerful moments are close-ups of Deja’s face when her emotions shift. Near the end of their evening together, Deja’s face reacting to a plain but heartfelt admission from Josiah is familiar and priceless to any teenager or former teenager.

[[Following the story is a conversation between collaborators Rowell and Hicks, delving into plot ideas, character development, and the artistic design process.]]