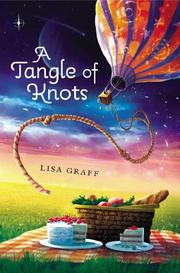 I pick up a book for a number of reasons—good reviews, a fabulous cover, or because a friend or colleague gives a recommendation. Rarely does a book’s title encourage me to dive in. Even though A Tangle of Knots has all of the aforementioned things, its title is what really struck me.

Tangles and knots both suggest tension, complexity, and stress. I don’t know about anyone else out there, but the world has seemed to be a tangle of knots lately. I’m not sure when the tangle of knots began for me—maybe 9/11 was the first time I truly  comprehended catastrophe. Since then, and very recently, it feels like they just keep coming– the shootings in Aurora, Colorado and Newtown, Connecticut. The Boston Marathon bombings. The tornado. The daily violence here in Chicago.

That’s just the United States. If I start thinking about the terrorism in Mogadishu or the violence in Syria, the knots get thicker and the tangles more snarly.

So what does this difficult stuff have to do with a middle grade novel? Well, I picked up this book in the middle of one of those really tangly, knotty weeks. I had read first-person accounts from the families affected by the Newtown, CT shootings at my doctor’s appointment. The Boston Marathon bombings happened. Then the tornado came. Yet, as I read Graff’s novel, a number of things changed for me. First of all, I let myself sink into the world of the novel and was distracted from my sensitivity for little while. Graff’s eloquent, imaginative story weaving and her sophisticated, third-person writer’s voice made it impossible not to be encapsulated by the book. Secondly, I laughed, probably for the first time that week. Lastly, the book was a window and a mirror.  I thought about the book’s tangle of knots, my own tangle of knots, and the world’s tangle of knots, and I accepted them all.

This acceptance probably has to do with the fact that the book is all about cake, and there is no way I can be in a bad mood when I am reading about cake. The protagonist, Cady, is an orphan searching for her place in the world. She has her own special Talent—she can meet someone and instantly know his or her favorite cake. I love Cady. The novel is rich with a puzzle of characters, but what I love about Cady is that she has lost almost everything, and she is not bitter. By the end of the book, I realized that Cady’s magic had nothing to do with her cake making—it is all about her heart. Add in a whimsical family, an old woman who has lost her ability to speak, a boy who has a Talent for spitting, a thief, several real cake recipes, and some blue suitcases–we’ve got a winner.

As I turned the last page, I stopped thinking about the horrific parts of past tragedies and turned toward the small miracles. The police workers on 9/11. The Boston marathoners who crossed the finish line and ran to the local hospitals to give blood. The interview with the woman who had lost her dog in the rubble of Oklahoma’s tornado (see attached video). I know people talk about the small stuff, but it truly is everywhere. And it’s written all over Graff’s novel. A ferret. Peanut butter cake.  A missing dinosaur bone.

And then I thought: tangles and knots. Yes, both suggest tension. But put in a different light, they suggest stability, support, strength. We tie knots when we want something to stay together. When my hair tangles, it comes together in clumps, and each individual hair is indistinguishable. Maybe sometimes we need to be individuals, to be untangled and free. But other times, especially hard times, we need to tie knots with each other, and learn to lean on each other for support and strength. Cady does.

Graff writes, “Cady was one of the biggest-hearted people Marigold had ever met—she tried harder than anybody else to make others happy…If Marigold had learned anything that week, it was that trying hard and being a good person didn’t always mean that good things would happen to you.”

We all know that bad things happen. But that fact doesn’t make Cady lose her sensitive heart or her willingness to stay positive, so it won’t make me lose mine, either.

I think my favorite cake would be a chocolate one; almost brownie-like, with a really rich, dense texture and chocolate frosting, warmed up with ice cream on the side.

One thought on “A Tangle of Knots, by Lisa Graff”