By Alena Rivers and Hal Patnott

This week we decided to feature a review of one new, and one upcoming graphic novel. Often we select works for our posts based on thematic similarities, but this week we wanted to explore a format we haven’t written much about in the past. Check out our thoughts on Sweaterweather & Other Short Stories by Sara Varon and the advanced review edition of Decelerate Blue by Adam Rapp and Mike Cavallaro.

What graphic novels are you looking forward to reading this year? Let us know in the comments below! 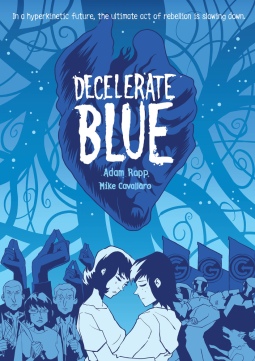 Sara Varon has published several praise-worthy graphic novels. Sweaterweather & Other Short Stories contains eight stories from her first published book in 2003 titled, Sweaterweather. Nine additional short stories were included in this expanded version. Each of the stories is accompanied by a short introduction explaining the thought-process behind the story, giving readers a sneak-peak into the progressive development of the author’s text and illustrations. The stories are simple in nature, often depicting illustrations of brief moments in the daily life of her anthropomorphic characters. These moments range from the common, such as preparing a meal for a dinner guest in the story titled “The Dinner Guest, to the more imaginative of events like those in “The Flight” where a non-flying character barters for feathers from birds so the character can experience flight. Descriptive panels on the ins and outs of beekeeping or what it’s like to ride a subway in Mexico City provide informative insights into the author’s experiences.

The color palette is a modest deep blue and stark white for most stories, while some of them include shades of pink and purple. The author includes summaries of interviews she conducted with other work-from-home artists in her attempt to discover the secrets to successful work-from-home endeavors. Sweaterweather & Other Short Stories is an illuminating, behind-the-scenes dive into an author/illustrator’s making of a comic that will appeal to both graphic novel novices and long-time fans of the format.

In fifteen-year-old Angela’s Velocity Suburb of New Fleet Tempopolis, life never stops accelerating. That’s “the Go Guarantee, Go” (3). At Hyper High she takes classes in Brief Lit, and during Health, her teachers hand out Rapid Jo supplements to keep students alert. Angela’s parents sleep standing up to start their morning more efficiently. No one uses adverbs or adjectives in conversation. The Guarantee Committee holds everyone to the highest standards of speed, monitoring the citizens through surveillance cameras and by implanting tracking chips in their arms. Desperate to escape the regulation of her society, Angela joins forces with a secret, underground civilization that lives slowly in defiance of the Guarantee Committee.  When she discovers their haven beneath the ground, she knows she can never return to her old life. She refuses to live in a haze ever again.

Decelerate Blue is a fast-paced, dystopian adventure.  The sharp-angular design of the characters and backgrounds brings Angela’s efficiency-obsessed world to life. Within the first five pages, Rapp and Cavallaro introduce the steep consequences of defying the Guarantee Committee, which adds to the suspense when Angela runs away from home. Although Decelerate Blue is initially engaging, the resolution arrives abruptly. Angela’s love interest, Gladys—a girl Angela meets when she moves underground—receives a tragic and brutal end when the Guarantee Committee roots out the colony. Ultimately, Decelerate Blue offers an exciting premise, but it lacks a satisfying conclusion.