For this week’s post, I am excited to share my review of Mask of Shadows. It’s already one of my favorite upcoming young adult novels of 2017. In keeping with our theme of selecting titles that uphold ALSC’s Core Values (collaboration, excellence, inclusiveness, innovation, integrity and respect, leadership and responsiveness), Mask of Shadows demonstrates excellence and inclusiveness. Stop by the Butler Center to check out our advanced reader copy of this September release! 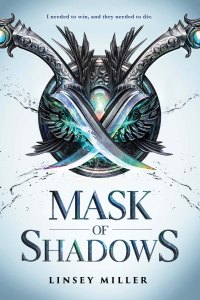 All the nobles of Igna fear the might of the Queen’s Left Hand, four elite assassins known only as Emerald, Ruby, Amethyst, and Opal. When Sal Leon, a thief and a street fighter, steals a poster advertising auditions for the new Opal, they seize the opportunity to seek revenge on the nobles who betrayed Sal’s homeland during the last war. Kill or be killed, the auditions require strength and subtlety. Participants must eliminate their competition without arousing suspicion. Any moment might be Sal’s last.

A fusion of fantasy and political intrigue, Mask of Shadows is a dark and suspenseful read. Miller delves into themes of gender identity, prejudice, and privilege. The positive exploration of Sal’s genderfluidity makes this book an important addition to Young Adult collections. Sal’s identity is never portrayed as a hardship. Although Sal dresses to show how they wish to be addressed, they are not focused on cisnormativity, but rather on being who they are. They explain, “I always felt like Sal, except it was like watching a river flow past. The river was always the same, but you never glimpsed the same water. I ebbed and flowed, and that was my always.” Throughout the book, Sal grows as a character and learns to trust someone they initially saw as an enemy. Miller develops a compelling romantic subplot. The cliffhanger ending of this debut novel will leave readers dying for the next installment in the duology.