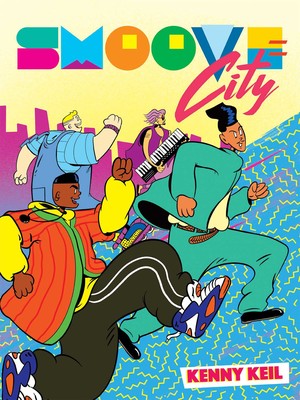 You haven’t heard of Smoove City? They’re the dynamic group reminiscent of Boyz II Men, except even handsomer. Maybe you haven’t heard of them because Smoove City is still a dream. Its members–Ray, Ronnie, Vinnie, and Mikey–are squeezing in music practice between restaurant gigs and rollerblading sessions. When the group pools their money for a demo cut at the mall, they know exactly where they’ll send it: Phat Cat Records, headed by the goddess of hip hop, Ms. Laverne Lavalle. Ray, Ronnie, Vinnie, and Mike barely make it past the front door. When a duplicitous Phat Cat Records intern hoodwinks the group into signing onto his side project, hijinks ensue. Smoove City finds themselves touring around the country and eventually getting thrown into jail for promoting devil-inspired music. The media sensation that follows throws Smoove City into superstardom, but can they ever get out from under their bogus record deal? Kenny Keil’s graphic novel is an ode to early ‘90s R&B. While the story of best friends trying to make it big is a familiar tale, Keil’s saturated pictures and pop culture references give the story a fresh twist. Keil gives readers a double narrative:  the main plotline focuses on the four friends navigating tour buses, run-down motels, and empty audiences; the secondary plot involves Smoove City’s demo tape catching on at house parties and becoming an underground sensation. Smoove City’s plotline is jam-packed with action and wacky jokes, while the underground mixtape provides some subtler humor amidst the group’s gags. This is a fun, nostalgic, and lighthearted read for middle schoolers and high schoolers alike.