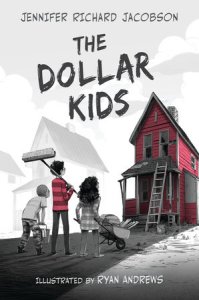 When his family wins the chance to buy a house for just $1, twelve-year-old Lowen sees it as a chance to hit the reset button — Mum can open her own restaurant, Dad can follow his dream of working in a clinic in an underserved community, his brother Clem can finally be the star athlete, and his sister Anneth — well, she’ll need convincing. And sensitive, artistic Lowen can work through his grief over the death of a friend and guilt over believing he caused it. But moving to a small town isn’t easy on any of them, leading everyone to question whether the Dollar House program was such a good idea after all. Dubbed the “Dollar Kids” by hostile new neighbors skeptical of the program and “whether it’s a help or drain on the town” (p. 328), Lowen and the other new kids in town struggle to make a place for themselves, rehab houses, and rebuild community.

The idea of home, be it a building, a community, a family, or a feeling creates a strong backbone for this plot, helping to pull the reader through the slightly slow start to the one year the book covers. By mid-book, the pace picks up in both action and time (the progress noted with each new chapter). While slightly awkward, the change of pacing mirrors the changes Lowen experiences as he processes his grief and settles into life in Millville. Scenes from Lowen’s comic book drawing layer in additional elements of his grieving process, questions of faith, and ultimately his healing.

Diversity (of age, gender, and cultures) among the characters in this story provide a varied range of coping mechanisms for dealing with uncertainty, insecurity, and change by both the new families settling in and Millville residents dealing with the decline of their small, but proud town. The inclusion of parents and other community members as active players in the story is a refreshing change from books that often leave you wondering “What happened to all the adults?” and provides a subtle reminder that communities need all types of diversity to thrive.