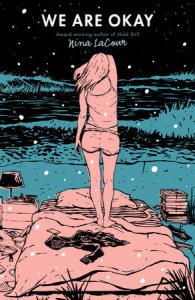 We Are Okay by Nina LaCour (Penguin Random/Dutton, 2017)

The day after her grandfather disappears into the ocean forever, Marin boards a plane from San Francisco to New York determined to disappear too, even if it means leaving behind the people who care about her. At her college in the city, far away from her old life, she can become someone new, pretend her phone is secondhand and that the girl named Mabel sending her messages is a complete stranger. However, some relationships mean too much to end. As Marin’s grandfather once tells her, “[Sometimes] two people have a deep connection. It makes romance seem trivial. It isn’t about anything carnal. It’s about souls. About the deepest part of who you are as a person.” Neither Marin or Mabel can forget about their bond. After months of silence from Marin, Mabel still refuses to give up on her best friend, the girl she fell in love with during the summer of their senior year. She’s willing to fly three thousand miles to learn the truth and convince Marin to come home to the people who want to support her.

We Are Okay by Nina LaCour is a haunting coming-of-age story about love and moving on after betrayal. The novel is written in first-person from Marin’s perspective. Chapters alternate between the present and flashbacks to her senior year of high school. LaCour’s lyrical prose and her sparing use of dialogue beautifully convey Marin’s loneliness and longing. Despite the heavy sorrow that fills the pages,the book ends on a note of hope. Grab a box of tissues. We Are Okay is a must-read of 2017.

Check out our advanced reading copy of We Are Okay at the Butler Center!